In Miss Cattywhompus’s class of critters, Ozzie, a slightly day-dreamy dog, considers himself the art expert. When the big art contest rolls around, he figures he’s a cinch for the win. Then the top prizes are announced, and he discovers to his horror that the subject of the competition was a boat and not the goat he drew. His teacher reminds him that winning isn’t everything and that paying attention to instructions is its own reward. Then, just like the ever-energetic blue heeler he is, Ozzie figures out a way to make his goat picture a boat after all. While not distinguished, the bright and bouncy watercolor-and-ink illustrations portray a busy classroom and a teacher who lovingly oversees the chaos. The lessons of learning to deal with losing and the importance of listening are gently given. Ozzie’s dogged persistence will find a ready audience and resonate with children who often rush in without thinking.

In “Ozzie and the Art Contest,” Dana Sullivan teaches young readers some very important life lessons. Ozzie, a bright blue dog, is very excited when his teacher announces that there will be an art contest. Ozzie loves to draw and he is sure he will win.

He quickly reads the instructions on the way home and uses his skills in folding paper to make a paper airplane out of the instruction sheet. Once home, he begins to draw his picture of a goat. His good friend agrees to model for the picture. Ozzie just knows he’ll win the contest — he knows a lot about goats!

On Monday, he proudly turns in his picture. The teacher tells the class that the winners will be announced the next day. Ozzie can hardly wait to see his picture in first place.

But the next morning, when he sees the winners displayed on the top row of the bulletin board, his is not among them. He looks and finally sees his picture of the goat in the bottom row, under the heading “Honorable Mention.”

While the rest of the class is cheerfully celebrating a successful art contest, Ozzie sits miserably at a table alone. He is not happy. His caring teacher notices and joins Ozzie, who simply can’t understand why his lovely drawing of a goat didn’t win.

Clever second graders with whom I read the story were quick to notice that all the winning pictures were of boats, not goats. They also quickly surmised that the contest was to draw a picture of a boat, not a goat.

Ozzie’s teacher gives him some simple advice. She says, “Winning isn’t the only reason to do things. Especially when it’s something you really like to do.”

Two life lessons. Read the instructions carefully. Winning isn’t everything — just have fun. What great topics for discussion with primary students. This is a perfect read aloud for classrooms from kindergarten through third grade.

Ozzie enters the art contest at school only to be disappointed at the results.

When Ozzie’s teacher, Miss Cattywhompus, announces the upcoming art contest to her class, Ozzie is especially excited. (Though most elementary teachers would not host an art contest, it does serve to get the plot going.) Ozzie loves to draw (and skateboard and fold paper), and he knows he will draw the best goat. On the day of the big announcement, he is sad to see his pictures on the bottom row with the other honorable-mention pictures. His blue mood is reflected in his demeanor. His teacher tries to cheer him up, but nothing works until she points out that his misreading of the instructions is the real reason he didn’t win. The lessons could not be more obvious: Read the directions carefully and enjoy the process, even if you do not win. The cartoon style, in ink and watercolor on broad expanses of white, is the right choice for this light tale. The messy typeface might challenge new readers, though. Youngsters will feel in on the joke when they notice that all the winning pictures are of boats, and all the also-rans are of something else. 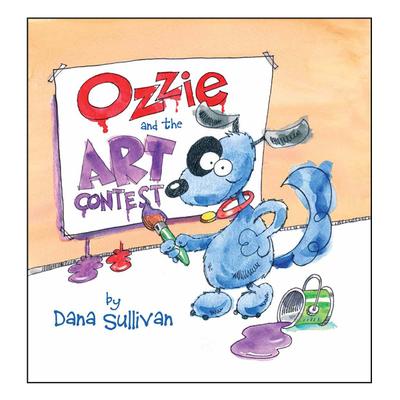