A pup wakes up one morning not feeling well. His older sister springs into action, toting poor Digger to the doctor’s office in a red wagon. He is afraid he will need a shot, though Daisy assures him that shots make you feel better and only hurt a little. With her repeated coaxing and entreaties of “You must be brave,” Digger consents to have his eyes, ears, and mouth checked. The doctor concludes that he simply has a cold. His sister, however, is due for a shot. Suddenly sweating, Daisy says she doesn’t want one and now claims that they hurt. The final page shows an irritated Daisy being reminded that she told Digger that shots didn’t hurt much. The repetitive, very simple text will help emerging readers gain confidence, and the story deals with a common, relatable fear. The cartoon art is brightly colored and includes a few doggie jokes, e.g., a sign on the title page reading, “Paws for your flu shot!” After the situational and textual repetition, the twist at the end will give readers (especially younger siblings) a giggle. For general purchase, especially in libraries in which beginning readers are heavily used. 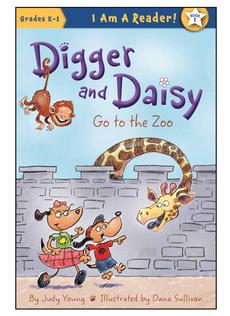 This book may be brief but it offers a lot to the emerging reader. Ms. Young’s text is spot-on for ages 5 to 7, and the “easy reader” vocabulary should foster a sense of accomplishment for the newly-independent reader. The story line offers the excitement of preparing for a big performance, the importance of practicing for perfection, and the unpredictable havoc—and stomach butterflies–that stage fright can bring. And even though the book has very few words, Ms. Young manages to do two things: she builds tension and suspense by pitting readers against the unknown (in this case, the “unknown” is whether poor Daisy will remember her whopping two lines), and she keeps readers smiling to the end of the book.

Dana Sullivan’s bright and bouncy illustrations are just what the kid-doctor ordered. Digger and Daisy’s eyes are always wide and eager; their faces are always friendly (even when one of them is a little nervous); and their surroundings conjur warm and fuzzy memories of those school plays and bumbled first lines of long ago.

In this early reader, a dog learns from his sister what he can and cannot do like other animals on a visit to the zoo.

It is a hot day, so Digger, a spirited pup, and his older sister, Daisy, decide to go to the zoo. “Digger and Daisy look at birds. They see big birds. They see little birds. / Red birds. Green birds. Yellow and blue birds, too.” There is a nice rhythm to that, and it’s accompanied by nice cartoony artwork that readers will relate to, since, despite its subtle sophistication and adept lines, they might fancy they could do the same. Digger tries to imitate a flamingo standing on one leg, and he tumbles over. His sister tells him that he can’t do that but that he can walk on two legs. On

Digger and Daisy are simply out for a pleasant day. They go to the zoo, and encounter our friends at the zoo and learn a good deal about the animals at the zoo and what they can, and cannot do.

Digger tries to imitate the animals that he sees, while Daisy tries her best to correct him and guide him thru the wonderful world of animals. Kids all like to go to the zoo, and kids will enjoy reading about the adventures of Digger and Daisy. I am sure that parents will enjoy reading this book to their kids and grandkids.

This is a Grades K-1 “ I am a Reader “ book and the back of the book provides information for all those reading specialists out there ( Guided Grade Level=K, ATOS Reading Level=1.8, Lexile Measure=190L and Word Count 471.

This is a great book , wonderfully illustrated by Dana Sullivan and written by Judy Young, who is the author of several unforgettable books. I always look forward to any new book written by Judy as they are all delightful and charming! 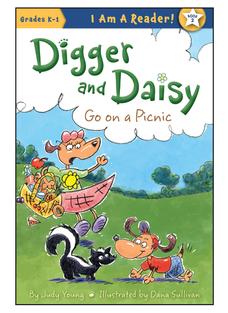 This is a fun, humorous tale of Digger and his big nose young readers will love. Digger is certainly a curious little brother and his older sister, Daisy, is ultra-patient with him. Like many youngsters, Digger is insatiably curious and loves to explore new things. Fortunately his big sister Daisy keeps an eye out for him. There’s an adorable twist at the end of the book that will make young readers chuckle at Digger. The artwork it bright, colorful, and has that Digger ‘n Daisy spunk I saw in the first book in the series. Digger and Daisy are a brother and sister team that will definitely be a hit series for beginning readers.

Quill says: The very youngest readers will love the new sister and brother team, Daisy and Digger, as they are off on their second adventure in the series! 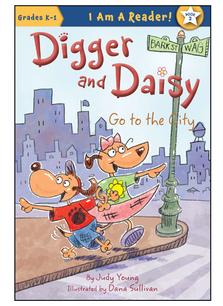 Author Judy Young’s new early reader picture book is called Digger and Daisy Star in a Play, and it has a little something for everybody. In it, Digger and Daisy are preparing for their upcoming roles in the school play. Daisy is thrilled to be playing a princess with a speaking part of a whopping two words. But Digger is not so happy; he is playing a tree, and trees just don’t have speaking parts.

After days of memorizing lines and “non-lines,” the minutes tick down and the play gets underway. But things suddenly go haywire. The spotlight is shining and the audience is looking, but the play has come to a screeching halt. Someone needs help, and fast.

through the zoo. “I want to climb a tree,” says Digger, inspired by monkeys. No chance. But his sister reminds him that he can climb stairs, till they are eye to eye with the giraffe. When they spy the duck pond, Digger asks if he might go in. His sister concurs, but Digger balks, since he had failed so many times that day. But his sister encourages him, until he takes the plunge. It’s a lovely little tribute to sibling camaraderie.

Like Daisy encouraging Digger to dive, this work is a welcoming invitation to read and a sweet encouragement to spend time with siblings. (Early reader. 4-6)

In their fourth sibling adventure, Digger and Daisy are as fresh and curious as when readers first encountered them (Digger and Daisy Go to the Zoo, 2013); at this pace, there’ll be no issues about ever having to grow up.And, frankly, who wants them to? These two young canines—the older Daisy, in glasses and a skirt that looks like a pink banana; the younger Digger, all roving eyes and nose—are the kind who can squabble and keep it to a sentence in length, not a daylong misery. This outing is to the city, and Daisy cautions Digger (she frequently cautions Digger just before Digger sets in motion whatever she has cautioned him about) to “Stay by me.…You do not want to get lost.” This refrain is a touchstone for beginning readers and, of course, one that Digger will (almost) lose track of. Daisy wants to visit aGoing to the big city can be a real treat, but it can also be scary for first-timers. That’s why it helps to have two furry and adorable puppies named Digger and Daisy to show young children just how it should be done.

Kirkus Reviews Digger and Daisy Go To The Doctor
Reviewed on July 15, 2014

In this latest outing for Digger and Daisy, the elder dog sister guides the younger dog brother through a visit to the doctor.

Young’s comradely canine siblings have a history of enjoying adventures together, but going to the doctor is a different order of things for one simple reason: Shots hurt, and doctors always seem to be waving around needles. However, in this early reader, Digger is under the weather—“ ‘I do not feel good.’ Daisy looks at Digger. He does not look good”—so a trip to the doctor is imperative. “I do not want to go,” Digger protests. “I will get a shot.” “You must be brave,” replies Daisy, which is easy to say when you are

In Digger and Daisy Go to the City by Judy Young, the puppies find themselves window shopping on the busy sidewalks as cars and trucks whiz by. There is lots to see, but to be certain that their excitement doesn’t get the best of them, responsible Daisy reminds her brother, “Stay by me. You don’t want to get lost.”

Then follows a flurry of shopping, during which they look at hats, shoes and dresses – all activities that interest Daisy and bore Digger to near-tears. He doesn’t want to look at hats or shoes or dresses. But he does find something he wants to examine more closely: a toy shop with dump trucks, cars and fire engines!

Now Digger is interested in stopping to look but Daisy is not. And when she walks on ahead, they become separated. Someone gets lost. The only question is which one?

This next installment of the Digger and Daisy adventure is like welcoming back an old familiar friend. Though Ms. Young’s prose is short, sweet and to the point, it still manages to brim with humor. And as always, artist Dana Sullivan’s illustrations showcase round, innocent eyes, and wide, adventurous smiles against a backdrop of bright and defined colors.

Aside from the sheer joy of purchasing this book solely as an addition to your child’s library, it might also be used to introduce the subject of following directions, staying together when on an adventure, or simply taking turns so that everyone gets a chance to do what they like. 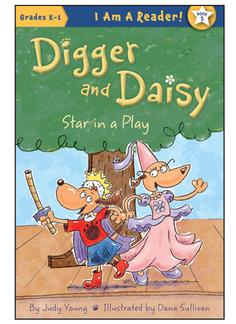 on the grill, all of which raise a note of concern from Daisy for one reason or another, and after Digger gets his nose clogged for being, as it were, too nosy, the story reverses gears. It retraces its steps but now with the world of scent closed to Digger’s jam-packed nostrils. It’s almost Shakespearean, until the skunk arrives on the scene, its dashing black-and-white look a fine counterpart to the waxy crayon sheen of the rest of Sullivan’s artwork.

A stink can come between the coziest of siblings from time to time, but rarely are they so sweet as Daisy and Digger. (Early reader. 4-8)

not on the receiving end. At the office, Digger doesn’t want to let the doctor do anything—take a look in his eyes, ears or mouth—so Daisy goes first. Digger has a cold, so he doesn’t need a shot. “But you do,” says the doctor. “Turn around, Daisy.” No good deed goes unpunished, though having someone to share it with is like that spoonful of sugar that helps the medicine go down. Sullivan’s artwork lends a hand, little bits of tropical fruit upon which to sprinkle the sugar.

Giving an inch in the sibling arena can yield a mile of returns, and Digger and Daisy are great role models. (Early reader. 4-6)

Kirkus Reviews Digger and Daisy Go On A Picnic
Reviewed on January 1, 2014

In Digger and Daisy’s second outing, Digger learns that—all appearances to the contrary—sometimes it is best to have a nose full of dirt.

Digger and Daisy, the two chummy canine siblings—as canine siblings, unlike certain other species, are wont to be—decide to go for a picnic. While Daisy is happy to take in nature with her eyes, her younger brother likes to exercise his nose. The words in this early reader have a nice levitating quality, even in the unlikeliest of places—“Digger likes to smell everything. He puts his nose in the hole. Digger sniffs. He sniffs dirt up his nose. Digger snuffs. He snuffs more dirt up his nose”—which make them fun to engage with. After Digger has gotten a good whiff of the flowers and the cooling pie and the franks 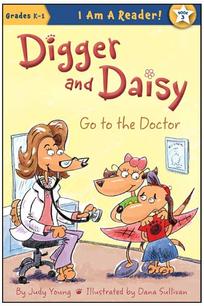